This was an exploit challenge that serves as a nice introduction to the concept of Stack Smashing Protector leaking.

Here's a quick run of this binary:

Lets take a peek at the assembly for this binary. 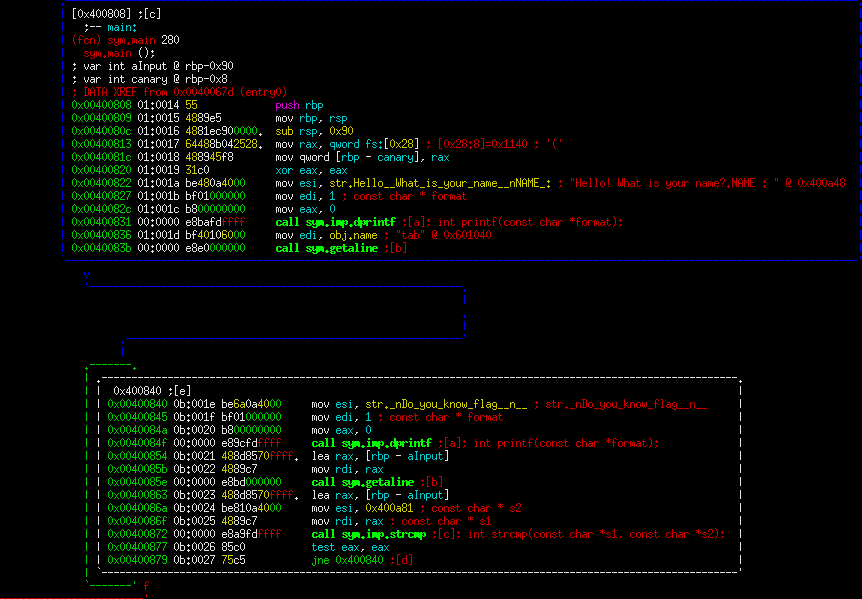 We can see the first thing it does is set up a stack canary (0x40081c). This is the standard stack protection that is added when you compile the binary, so initially I didn't think much of it.

Next, it prints out a string "Hello! What is your name?.NAME : ". It calls the function named getaline. Once that input is received, it enters a loop, getting input and waiting for the user to input "yes". Let's take a min to understand what the getaline function does. 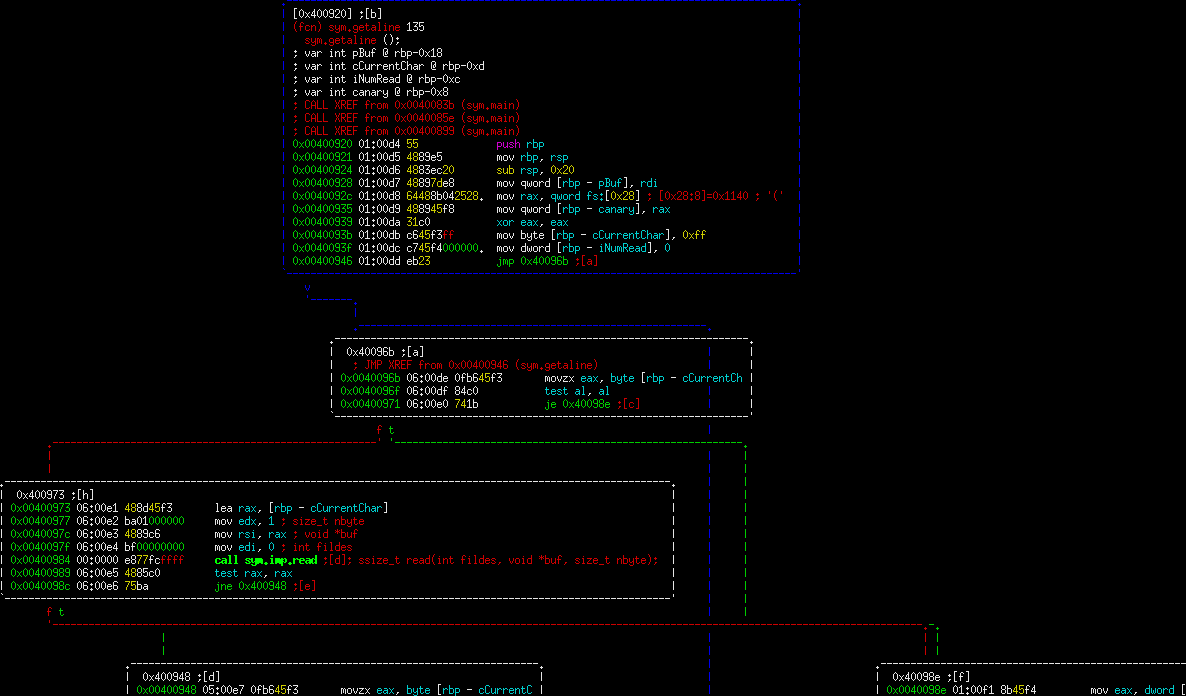 0x400928 -- Save the argument to this function (passed in rdi) onto the stack for later reference.

0x40093b -- Start off our currentCharacter variable with 255. This could have been anything other than 0 really.

0x400973 -- Read in a single byte from stdin into our currentCharacter buffer. If we read in 0 bytes, go to 0x40098e. Note, this doesn't actually check for errors... It really should check if the value is less than 0 and act accordingly.

Here's the next part:

0x400948 -- Check if we hit a newline character (ASCII encoded, this is the value 0xa) if so, replace it in the currentChar buffer with a null.

0x400954 -- Store our just-read in character into the buffer we were given as the argument. Increment our number of character read counter by 1.

0x40098e -- Check the canary, to go the fail if needed. Return the number of characters we read.

Note, that out of this whole method, we don't actually stop after a given number of characters. That is to say, we have an unlimited amount of characters we can read in each time. This function is basically equivalent to the known bad function gets. With this in mind, we can look for different things we can overwrite. 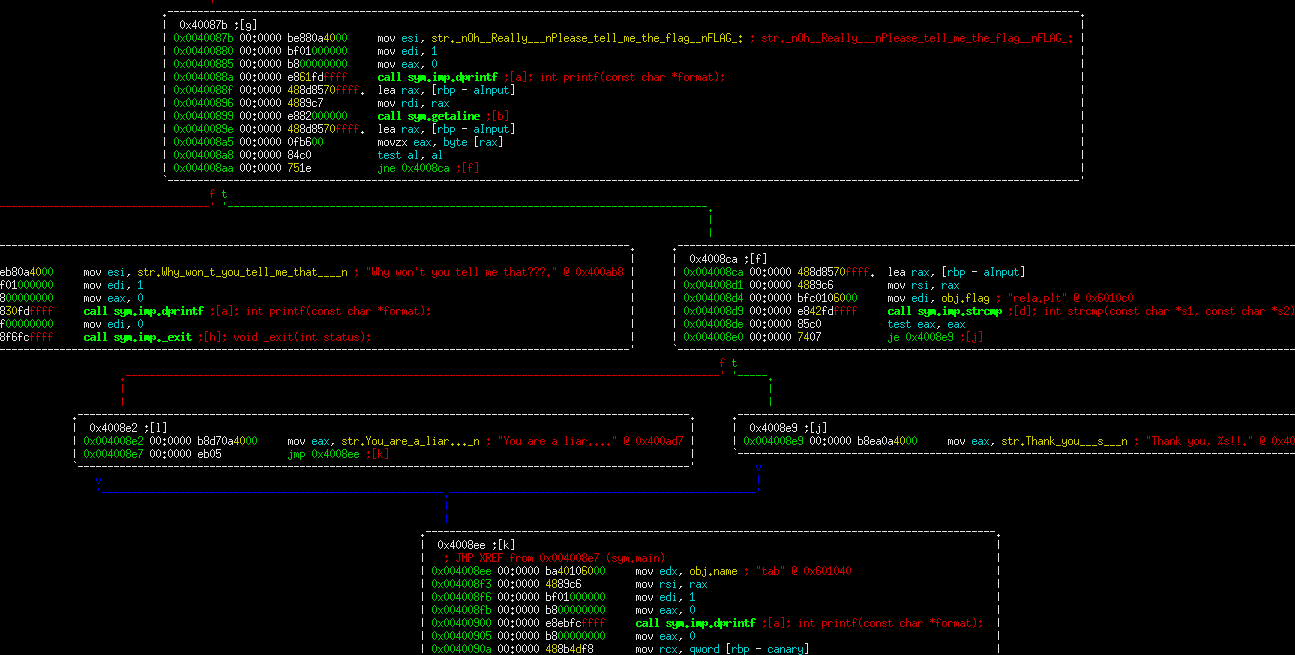 After you get out of the loop, you're asked for the value of the flag. The value you give it will be stored on the stack, while the flag is in the BSS section. Those two values will be string compared, and the output given accordingly. To be honest, I initially went down the path of trying to get to the winning code path. This is possible since you have an arbitrarily long write for your name. Your name variable is sitting above the flag in the BSS section. Therefore, if you simply write a long enough value (say 0x81 "A" characters), you can "guess" the flag. Here's an example:

While you pass the strcmp test, it doesn't really mean anything since you don't actually know the flag value. I got stuck on this for a bit, trying to find a way to iteratively discover the flag using this. In hind sight, I'm fairly confident this was placed in the challenge on purpose to cause people to look for the wrong solution.

Enter the Stack Smashing Protector. This is a feature built into compilers. In gcc, this is called -fstack-protector. Depending on what version of gcc you use, this may be default enabled or not. The concept is fairly simple. Add a variable into each function that you write (transparently to you), that will be random per instantiation of the binary. It is set on the stack as the first thing that's done, and checked that the value has not changed as the last thing your function does prior to returning. Again, this is entirely transparent to the code author.

It's actually fairly helpful and can be a pain in the butt, turning possibly exploitable overflows into simple crashes. However, there's a little gotcha here that was discovered. What happens when you cause this check to fail?

The interesting thing to note here is the "*** stack smashing detected ***: ./checker terminated" portion. Specifically, it is telling me the name of the application that crashed "./checker". Where does it get this information from? When an application starts, int main gets three variables whether it wants them or not. The first, argc, indicates how many arguments were supplied to this binary. The second argv, is an array of pointers to each of the arguments. The third, is a variable named envp that, like argv, contains an array of pointers, only this time to environment variables. Can you see the vulnerability?

If you're overflowing the main stack, or if you have a long enough overwrite, it's possible for you to continue to write upwards on the stack until you reach argv[0]. This is the pointer that is being dereferenced in the crash error message. This is the case that we have we have an unlimited readline function (so long as we have no nulls) that will allow us to overflow our buffer all the way up to the argv[0] pointer. With this in mind, we can write an address that we'd like to leak. Say, for instance, the global flag variable? That will be our game plan here.

Again, let's forget about the name parameter, as it doesn't appear to help us too much here. The flag variable is in the BSS segment, and thus in this compilation is a static address (0x6010c0). Remember though, this is a 64-bit binary, so we will need to pad this address with zeros to be able to dereference it correctly.

Let's find the correct offset from our buffer input to argv[0] using a cyclic generator from pwntools.

Now, we input that into our program and see where it crashes.

Much better! Now it's dying on strlen of our pointer. No surprise it will die here since our pointer points to a place in the binary that is unlikely to be mapped. Let's figure out where this actually is in our input now:

Easy as that. We now know that the argv[0] pointer is 376 bytes from the start of our controlled buffer. But wait, what about the nulls? The readline function stops after reading a null. We do have a nice loop up above where we can use this function as much as we want. This means, we can write enough to cause the last byte of our pointer to be a newline. The function will then turn this into a null for us. We can walk down from there, nulling out a single byte at a time.

Using pwntools, this is pretty simple. Let's just loop 8 times, and null out the entire pointer:

Notice, 376 is the index we found, 8 is the size of the pointer in 64bit architecture. So we're basically seeking to the end of this pointer and one-by-one forcing null values to go there. The rest of the exploit is fairly simple now. We can just write our pointer directly at that offset using the final flag check section. Since we have been writing "A" for all our values, it's improbable that we would pass the stack check. It's not impossible as far as I know, but certainly we can be fairly confident that we will cause this binary to stack protector fail.

Putting it all together

Great example from SECCON for a mostly practical use of the so-called Stack Smash Protector leak.