This reversing challenge is a good example of how you can solve a problem a few different ways. I initially solved this challenge symbolically (which i believe is the easiest way, actually). However, the challenge can also be solved dynamically which is what the authors intended. I will go over both solutions here.

Another x86 binary. This time it's stripped which means we won't get to see the developer's function names. Let's run it:

If we are to believe the help output, the flag is 41 bytes and is the first command line argument. Let's give it a shot:

Looks legit. If we give it 41 chars it says no. 40 chars it tells us our length is off. Let's check out the control flow. 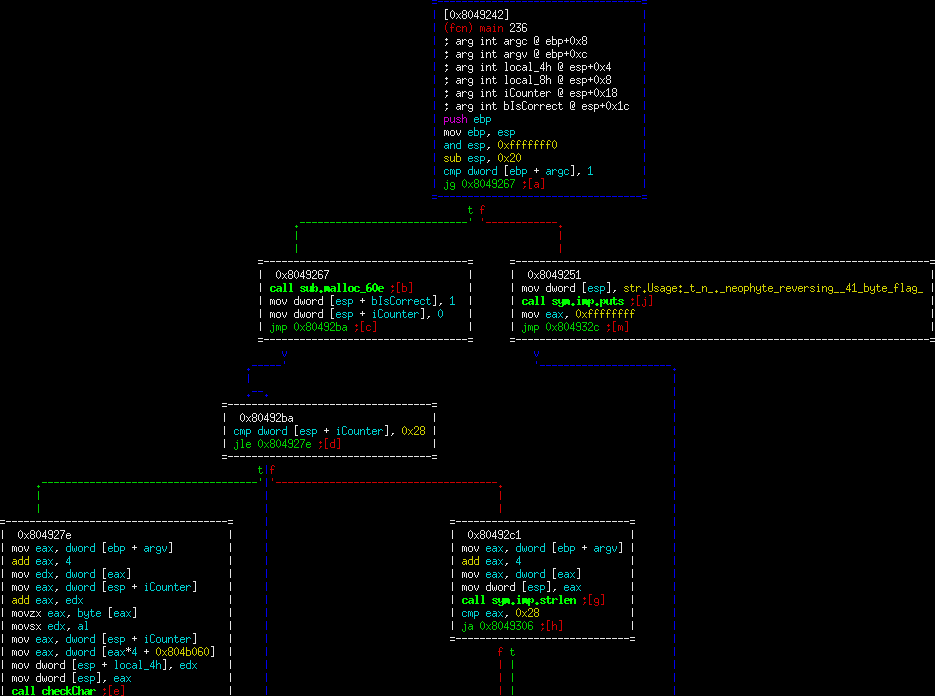 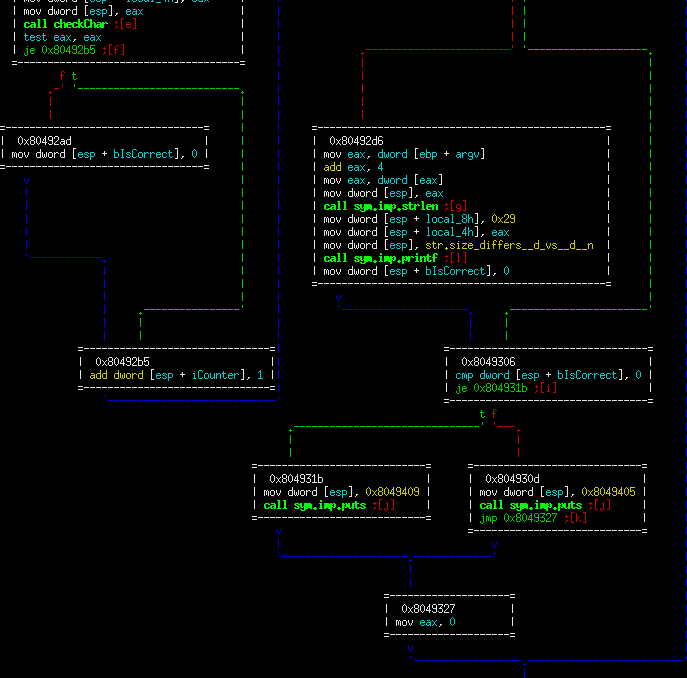 Starting at the top, we see the check for if the user put in a flag at all (compare argc with 1). It then creates some space, sets initial variables, and starts up a loop. This is a key part to notice. Let's walk through it.

0x80492ba -- Here we're at the conditional part of the loop. This is roughly equivalent to "if index <= 40". Note that our key is 41 and indexes start at 0, so here we're looping through every character of our input one at a time.

0x804927e -- The program is doing some sort of analysis at this point. I didn't dive into this part too much actually. However, this block makes a call to a function, then changes execution based on if the output is true or false. If false, if sets the "bIsCorrect" variable to False. Then it increments on to the next character.

0x80492c1 -- AFTER performing the check to see if your input is correct, it checks the length of your input. Kinda a strange place to put that code, but regardless that's where it will tell you if your length is incorrect.

At this point, the main unknown is how the character check function works. However, we don't actually need to understand it. This is because we get feedback immediately after that function call, and the key check is incremental. This means we can actually just brute force it. Let's look at the symbolic approach first.

This is the approach I took initially. As usual, my tool of choice for symbolic execution is angr. To be honest, the script is so simple there's not much to say about it here. The main thing is that we create a symbolic buffer for the input, and tell angr to find our winning location while avoiding the location we know to be failure (where it sets success variable to false).

It really is that easy with angr. Running it gives us the flag:

As you could see in the flag, the author intended this to be done by a debugger script. The symbolic approach is actually easier and faster, but let's do the dynamic one for kicks. For this, I initially tried to use radare2, however I ran into some bugs that caused me not to be able to complete it. I switched to using gdb scripting instead.

The general idea is this:

We can do this because the binary is checking the flag one character at a time and updating it's memory as it goes. So we know immediately when we have failed, and also at what point we've failed. That reduces the search space drastically. If we use lower case, upper case, numbers, and some symbols for our search space, we have a total search space of 78*41 == 3198 at worst case. That size search space is very doable for any modern machine.

Gdb exposes a gdb module for python. It has a lot of functionality that allows you to more programmatically interact with gdb. I've honestly never taken the time to learn most of it. The one command I use is called gdb.execute(). All it does is takes in your input and runs it as if you typed it into gdb directly. This way you don't really need to learn the gdb python bindings if you don't want to.

There seems to have been a little bug in this program. Not sure if it was intentional, but the "T" in OpenCTF didn't pass validation. The rest of the string works fine, so in this script I just bypass this index. Without this bug the dynamic script would be cleaner.

Sit back and watch text scroll :-)